The Underland Chronicles Book One

Rich in suspense and brimming with adventure, the New York Times-bestselling Underland Chronicles unfold the fate of the Underland and the great warrior, Gregor. Suzanne Collins is also the author of...

Rich in suspense and brimming with adventure, the New York Times-bestselling Underland Chronicles unfold the fate of the Underland and the great warrior, Gregor. Suzanne Collins is also the author of... 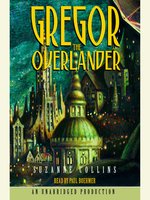 The Underland Chronicles Book One
Gregor the Overlander
Suzanne Collins

The Underland Chronicles Book One
Gregor the Overlander
Suzanne Collins
A portion of your purchase goes to support your digital library.